Introducing a project designed to inspire connection between multiple art practices while thoughtfully bridging the Arizona’s arts and culture and development sectors. 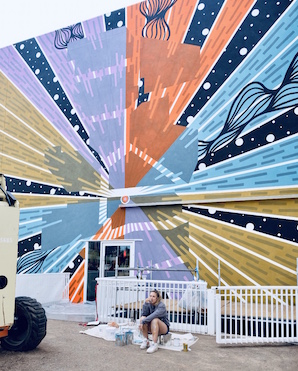 Artist Jane Goat in front of her mural commissioned by Park Central: “From What We Were.”

In the center of the Phoenix metro area is Park Central Mall. Developed in the 1950’s, Park Central took the position as the city’s very first shopping mall and its success with attracting retailers affected change for all of Phoenix.

In a city known for its seasonal weather, the development represented the perfect storm of economic opportunity and space that helped pave the way to Phoenix’s suburban lifestyle.

Today, the climate has changed, informed by multi-modal marketplace of consumers who are returning to dense urban centers, not only work and play, but also, increasingly to commit to causes and embrace the authentic culture and expression of their city.

With this fresh lens, commercial development has an opportunity to evolve, taking on new, non- traditional forms to further connect with a public energized by community, innovation and civic pride. A forged partnership between the city’s development and arts communities is the best opportunity for Phoenix to respond to this trend and shape its success.

Park Central Mall is in a unique position to demonstrate this next level approach. The ownership group, HPPC LLC, intends to create a nexus for the urban area and at the same time a cornerstone for community.

As Park Central aims to attract offices and companies, with retail and restaurants, to a revitalized Central corridor, there will be equal emphasis on intersecting arts and commerce while cultivating a central gathering place that will reinvigorate Phoenix’s Central City.

The development of an Arts and Culture Plan, entitled “ART+FORM,” is a critical pathway to achieving this vision.

Artlink Inc. has entered into an agreement with the Park Central development team to develop this Arts and Culture Plan to help Park Central reach its potential. Artlink is a 501(c)3 nonprofit whose mission is to keep the arts integral to the development of our city. It will apply its three decades of experience in connecting artists, business and community to create a collaborative plan that will successfully merge arts, culture, and development to create a catalytic place in the heart of our city.

The outcomes of this project will inform identify replicable models and methodologies that can be adapted by business, community and city stakeholders to further reinforce the connection between the arts and development communities in the Phoenix metropolitan area.

With support provided by:
Park Central