From the 2017 Artlink Annual Meeting 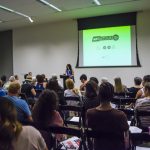 Artlink’s 2017 Annual meeting was held on Wednesday, June 14, at Phoenix Art Museum. The Artlink board welcomed 110 attendees, including artists, arts advocates, and representatives of the City of Phoenix, galleries, performing arts, and other arts organizations.

Amada congratulated Artlink on the pending 30-year anniversary Art Detour and lauded the hard work of community investment in the urban core over that time. Upon coming to Phoenix, she asked who “owned hip” in the Valley and it was very clear that it was downtown. The reason Phoenix Art Museum is thriving is because of all the hard work invested by those here; it takes this ecosystem of people to make a city great. The Museum is thrilled to be partners and looks forward to the next 30 years.

Artlink President Catrina Kahler proceeded with the meeting, beginning with the election of the 2017-2018 Board of Directors. Thanks were given to past board members Jill Bernstein, Sarah Levi and Mark Scarp who stepped down from the board earlier this year. Bernstein had served on the board since 2011. The board thanks them for their significant contributions.

By unanimous vote, the Artlink board renewed the terms of three directors:

This rounds out the current roster of the Artlink board:

Catrina provided an overview to the organization statistics included in a “by the numbers” annual report that reflected the past year’s work of Artlink, an organization whose operations are managed by a volunteer board of directors. The report includes the number of Art d’Core Gala attendees (600+); the Juried Exhibition sales ($16K) and awards given to artists from Artlink ($7750); the growing number of Mixed Media attendees (150+); and the number of submissions to artist calls (471).

The next Mixed Media Happy Hour will be scheduled in July.

The board expressed its gratitude to Downtown Phoenix Inc., for its partnership in printing First Friday maps.

Catrina introduced Artlink Treasurer Rick Naimark who reported on Artlink’s 2016-2017 finances. The emphasis on this year’s budget was on one-time investments that included Phoenix Urban Guide development and an updated brand and logo for the organization. The annual budget is approximately $75,000 to $80,000, much of which composed of sponsorships, grants and in-kind contributions. Articipant fees account for one percent of the budget. Artlink will be looking at ways to connect with organizations who are interested in connecting with artists.

Catrina introduced the new TAFF program. Artlink allocated $500 to the initial grant and is looking to make a long term commitment to the fund and its growth.

As a step in this direction, it was announced that For the People owners, Shawn Silberblatt and Chad Campbell, agreed to sponsor the new program by matching this initial grant, bringing the total grant funds to $1000.

Catrina introduced Vice President Sally Russell and Arts Committee Chair Constance McBride. Sally spoke to the importance of TAFF as a means of supporting artists. Constance emphasized the need for the arts community to grow along with the city. TAFF represents a new way to support, and mentor, artists.

Constance introduced AAC member Joan Baron to announce the recipient of the first TAFF grant, Ashley Czajkowski. Ashley expressed her thanks and looks forward to the mentorship opportunity.

Approximately 75% of the attendees were familiar with PUG. Catrina spoke briefly to the functionality of the site and the opportunity for both artists and arts destinations to upload their exhibition information. Artlink is partnering with the Phoenix Office of Arts & Culture on the development of the new calendar function, which will represent a single connected voice for the arts and culture community. Nicole Pasteur, representative of the Office of the Mayor, was in attendance and recognized for the City’s support of Artlink.

Artlink originated from the Art Detour event, which will celebrate its 30th anniversary in 2018. It’s not just an event for the public; it creates connectivity and community within the arts and culture community.

The dates for Art Detour 30 will be on the Third Friday weekend in March 2018: The Art d’Core Gala will once again be an opening night event on Thursday, March 15; Friday through Sunday will be the “Detour”; and Monday/Tuesday will be a series of symposiums that will focus on artist career development and the intersection between the arts and the community at large.

Planning for the weekend Detour may evolve so that the event activity and promotion can be more focused. Each day presents an opportunity to focus on a specific district.

The 30 year logo was unveiled with an invitation to everyone to suggest topics for the symposiums planned for the event.

A question was asked about trolley service during the weekend. The trolleys will likely run Friday through Sunday but the programming plan needs to further develop.

The goal of Art Detour 30 is to further establish Phoenix on the national arts and culture map. To do this, there is a need to focus on the quality of art, as well as the number of artists and the quantity of arts experiences.

A question was asked about the timing of Art Detour on the same weekend as Mesa’s Spark Festival. Artlink was pressed in recent years to maintain a consistent Art Detour weekend and committed to the Third Friday weekend. Artlink is interested in connecting Phoenix and Mesa, and finding a regional connection. Other comments referenced events such as Art Basel and Vivid that build energy and create geographical cohesiveness by connecting arts events happening in multiple areas of a city. Dorina Bustamante, representing Downtown Phoenix Inc., spoke to the opportunity to connect and become more of a national draw. Catrina confirmed that Artlink is open to collaboration.

Thanks to West Elm, a national retailer that supports local artists and is opening at Uptown Plaza, at Central and Camelback, on June 29. On June 28, there will be a pre-grand opening event and a portion of the proceeds with benefit Artlink.

Special recognition was given to Leslie Criger, who serves as operations support for Artlink, acting as Articipant liaison, and volunteer coordinator.

Artlink is making a commitment to pursue grants so that it may grow with energetic and skilled staff that will support the growth of the organization moving forward.

From the 2016 Annual Meeting 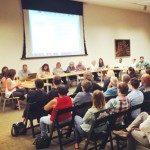 Artlink’s 2016 Annual meeting was held on Wednesday, June 1, and hosted nearly 100 attendees, including artists and arts advocates, and many representatives of galleries, performing arts, and other arts organizations.

The Artlink board bid farewell to board members Stephanie Lieb and Phil Jones. Jones, the former executive director of the City of Phoenix Arts & Culture office, had served on the board since 2011, playing a critical role in Artlink’s recent growth. The board thanks them both for their significant contributions.

This rounds out the current roster of the Artlink board:

Gail Browne, the executive director of the City of Phoenix Office of Arts & Culture, addressed the group, highlighting three areas of focus:

Browne hosts a regular meeting of arts districts and representatives of city departments to discuss a number of items to improve First Fridays coordination and elevating the profile of arts and culture, including the idea of a marketing campaign, and the development of a centralized events calendar. The city is distributing an events calendar survey in partnership with Artlink. The city will also aid in the expansion of Art Detour, expanding its leadership role in partnership with Artlink.

Planning for Art Detour 29 and Art Detour 30 begins immediately. The format for the next two years of the event will change, beginning in 2017 with a four-day schedule kicked off by the Art d’Core Gala:

Art Detour will evolve from a self-guided, unstructured format to a more scheduled program that will encourage even more participation from artists, arts venues and patrons. There will be a particular focus on working with artists to bring more patrons to their studios.

There will be an emphasis on producing a more interactive arts experience for patrons, focusing demonstrations and workshops. Artlink will continue working with Articipants to promote their destinations and respective activities. A cohesive marketing strategy will include an upgraded web presence and a map that reflects a scheduled program. An early start to the planning process will also allow for a more effective public relations plan.

A robust Art Detour 29 will set the stage for a special WEEK-LONG celebration of the 30th Anniversary of Art Detour in 2018. We will collectively work to develop this event as a showcase for Phoenix’s arts and culture, promoting Phoenix to a broader – national – audience. Every step taken over the next two years will be done with this ambitious goal in mind. What can Art Detour become?

Notes and next steps from Art Detour discussion:

The 18th Annual Juried Exhibition will take place on Thursday, September 15, 2016, at Heard Museum. The jury panel will be Nancy Hill, owner of Chartreuse Gallery, artist Fred Tieken, and Ann Marshall, Ph.D., the Heard Museum’s director of curation and education.

The Juried Exhibition will mark the first time Artlink will use Submittable, an online application platform. This will be used to build an on-going artist database, which will help Artlink help organizations and businesses looking for artists/artwork.

The schedule of the Juried Exhibition will likely change in the coming years, so that the 20th annual exhibition aligns with the 30th annual Art Detour.

Artlink currently runs three trolleys on a circulator route on First Fridays. The route was installed so that Artlink could better manage the hub stops and communicate a clear message to the public, so visitors know where to find stops consistently.

There have been recent requests to divide the route between a north and south route, and the attendees’ response to an informal survey was mixed. Artlink will hold further discussions about the route in the coming weeks. Thanks went out to David Krietor, Downtown Phoenix Inc. President/CEO, and his team for their support of First Fridays.

Thanks to all Articipants who have been consistently updating their information on PUG. This has helped Artlink promote Articipant exhibitions and activities much more effectively on social media. Please contact Leslie Criger at info@artlinkphoenix.org with any PUG related questions.

A big thank you goes out to all who volunteer to support Artlink! The trolley guides, the hub stop information tables, set-up for events are all done by volunteers. These programs couldn’t happen without volunteer support. If you know someone who wants to volunteer for Artlink, visit artlinkphoenix.org/volunteer.

That’s a wrap! Thank you and stay tuned for an exciting year ahead!